In an earlier blog post, I mentioned Randy Olson from Michigan State University, and how he used Hamilton Circuits to create a really great trip around the United States.   Well, he’s at it again.  Using the same mathematical concepts we learned about Hamilton Circuits, Randy has mathematically figured out the best strategy to answer the question, “Where’s Waldo?”

As I found myself unexpectedly snowed in this weekend, I decided to take on a weekend project for fun. While searching for something to catch my fancy, I ran across an old Slate article claiming that they found a foolproof strategy for finding Waldo in the classic “Where’s Waldo?” book series. Now, I’m no Waldo-spotting expert, but even I could tell that the strategy they proposed there is far from perfect.

That’s when I decided what my weekend project would be: I was going to pull out every machine learning trick in my tool box to compute the optimal search strategy for finding Waldo. I was going to crush Slate’s supposed foolproof strategy and carve a trail of defeated Waldo-searchers in my wake. 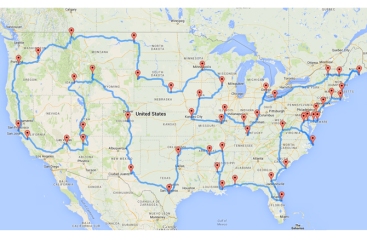 So, recently, my Facebook feed has blown up with this image, and related stories about doctoral student Randy Olson at Michigan State University.  Mr. Olson has done work finding optimum Hamilton Circuits, a topic that I used to teach in my Discrete Math course, but on a much bigger scale!  Mr. Olson attempted to optimize a circuit visiting a major historical landmark in each state of the contiguous United States.   Click here to see the whole story!  This link also explains more of how he did it, using a computer-generated algorithm slightly different than those we used.

Douglas Anderson School of the Arts